Congratulations for receiving the opportunity to shape young minds and spark interest in English as well as the rest of gaikoku beyond Japan’s borders. You are an Elementary or Junior High School ALT and fitting in and getting to work is surely on your mind. This page is to give you an outline of some cultural things to keep in mind when starting out in your new job.

Here are the topics that will be discussed:

This is an excellent article on Tofugu about Japanese work etiquette.

The above points are all things that I want to cover during Nagasaki Welcome Orientation, but in the interest of saving time have put them on the website.

As an assistant language teacher, you are expected to do what your supervisors and coworkers ask you to do. Other teachers need you to be able to follow directions. Your number one job is doing as you are directed.

The ALT’s ability and willingness to adjust, assist, and adjust again to the students and the JTE is crucial to the success of team teaching. Everyone has to go through the process of internalizing and adjusting to what “normal” is now.

Be proactive in finding out what is going to be asked of you.

Don’t be afraid to ask.

Teachers are extremely busy, but everyone needs more than 5 minutes to plan lessons. One way of finding out with more leeway is to approach your JTE/HRT in the morning before classes start and asking them how you can help prepare for the day’s lesson. This means looking from across the office and making sure they aren’t furiously trying to do something else, and when it looks safe to approach them, do so with a smile.

“Good morning! What will we do in class today? Can I help you?” is a great way to start that conversation.

Homeroom Teachers are who you will most likely work with at Elementary Schools. They are in charge of the education of each child in the room, from math and science to PE and music. Most HRTs are capable, versatile, and well respected in their community.

However, few of them are likely to have English proficiency credentials. Until very recently, English was not taught at the elementary school level. So that means that nearly everyone teaching now went to university and did teacher training when English was not required in Elementary Schools.

If you have an HRT that speaks English, or is enthusiastic about English education, consider them a precious commodity.

HRTs are beholden to the faculty and their students to teach all kinds of subjects, so English may not even be close to their top priority. Be understanding with their shortcomings when it comes to English and English classes. Prioritize your relationship with them above your own ideas of how English education at that school should go.

JTEs work mainly in Junior High Schools. They will commonly hold English proficiency credentials because they probably went to school specifically to be an English teacher. Many of them have studied abroad and are genuinely interested in your life as an expat teaching in Japan.

While their career focus may be English education, they may be beholden to considerations that many ALTs may initially find secondary to their goal in teaching children. Schools will place hard requirements on teachers to make sure their students can pass certain tests and meet other certain standards. This may mean that having students master a grammar point may take precedence over a conversation activity.

JTEs have to answer to many different higher-ups and likely have many other responsibilities at school beyond teaching classes. These may include after-school clubs, responsibilities surrounding school lunch, teaching other subjects aside from English, or peace education. So, while they may be genuinely interested in you, they may not always have time to hang out with you at school. Being understanding when they can’t talk but enthusiastic when they can will likely be met with appreciation.

A Formula for Implementing Change

Few people sign up for JET to be a tape recorder. Being proactive as an ALT can be one of the most rewarding aspects of the job. Making concrete plans and getting permission is the way to get to do what you want.

I’ve heard many ALTs lament their JTE’s or Contracting Organization’s unwillingness to try new things. However, I’ve also heard the stories of some ALTs affecting genuine change in their work environments and there are a few commonalities that run through those stories:

Last minute ideas are very unlikely to to be accepted because of the nature of the culture of Japanese bureaucracy. Many different people will need to look over a plan, ask questions, and hum and haw over many little details.

Planning something months in advance will substantially raise its chance of surviving its pass through the gears of bureaucracy. As a point of reference, in the Prefectural Office we begin planning in May for the International Festival that happens every year in October.

2. Do the legwork yourself

Doing the legwork means fleshing out an idea before bringing it to your supervisor to ask for approval. If it’s half-baked, you can safely bet on it being dismissed. If this idea requires the participation of third parties remember to do a preliminary check with them before going to your supervisor.

Write your idea out in a document down to the place and timings down to the hour and bring that paper with you when you go to talk to your supervisor about the idea.

3. Be grateful every step of the way

Expats in Japan commonly laugh at the gratutious amount that thank yous and apologies are thrown around here. However, as someone who is trying to work within this culture, it’s important to know that these flourishes of languages are not merely a nervous tick. Pleases, thank yous, and apologies are part of the fabric of Japanese cultural communication.

Employing the cultural language of the Japanese will help you in achieving your goals. Thank each person you discuss your idea with. Apologize for using their time on your personal project idea. If you run into them at the tea tray between classes give them another thank you and let them know how the project is progressing.

Click the image below to read about how Will had an idea and implemented it with the help of his fellow ALTs and his BOE! 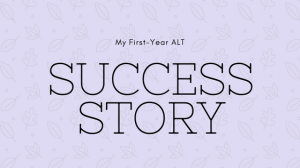 Your Coworkers Are Not Out to Get You

Hanlon’s Razor is a philosophical razor expressed in various ways including “don’t assume bad intentions over neglect and misunderstanding”. It is a way of eliminating unlikely explanations for a given phenomenon.

Never attribute to malice that which is adequately explained by carelessness.

A common thing for people to bring with them to Japan is a skepticism about the motives of their work superiors. In America, squeezing the people below you for all the work they’re worth and keeping the spoils for yourself is a fairly accepted trope. However, this is not the case when it comes to Japanese government work, which is what we are all doing. There are no profits or bottom lines. There is nothing to be gained by screwing over an ALT. In fact, every Contracting Organization I have personally interacted with have always been at the very least rigidly fair according to the ALT Contract. Most of them have been expressly lenient and accomodating to ALTs.

If something doesn’t seem fair, it’s likely because you don’t understand the situation well enough. If you adopt the attitude of “I don’t understand what you’ve told me. Please help me understand,” people will be more likely to be patient and try to help you.

Miscommunication and ALT misunderstanding (compounded by the fear of someone trying to screw them over) account for many emails and phone calls to the PAs. In nearly every case that I have worked on where the ALT thought they were being treated unfairly, the entire issue was resolved once the ALT understood what was going on.

Why Does’t My JTE Take My Ideas Seriously?

Very often ALTs will be asked if they have any ideas for activities for classes. However, not infrequently those ideas will be left on the cutting room floor after the planning is said and done. This can be frustrating. I’m sure that more than a few ALTs have asked themselves “why would they ask me if they don’t plan on taking my ideas seriously?”

This seems rude and disingenuous but it accomplishes something important in Japanese business etiquette. It checks what I call the “politeness box” when about to ask someone to follow your ideas.

The JTE/HRT may already have a solid idea of what they want to do but they don’t want to be overtly pushy.

So, the ALT is left to wonder whether the aim of the teacher is to actually get ideas or to politely edge in to instruct you on how they want to do class that day. A good way to find out which it is is to simply pass the question back to them.

JTE: ALT-sensei, do you have any ideas for class today?
ALT: Hmmm, do you?

Give this pattern a try and see if the teacher presents a full-blown lesson plan to you. If they don’t, and merely ask you again, you probably have a green-light to give some ideas. The JTE will have the ultimate say in what gets presented to a class. Some JTE/HRTs have very firm ideas about how they want to run a class and some will be very flexible. Use the first few weeks of classes to feel them out and try to get an idea of what they want out of you.

Japan’s culture and the bureaucracy that comes with it has many elements that ALTs may want to struggle against. Some people may even feel it their duty to help change Japan for the better and stand up against the portions that they disagree with. If you haven’t discovered for yourself yet, there are many things present in this culture that people tend to disagree with.

While it is admirable and desirable in many cases to stand up for what you believe in despite what people around you say, the paths of communication and action in Japanese society are well worn and difficult to escape. Pick your battles. If every point of disagreement about how long to do review or how many new words to work on becomes a dispute, be sure that your teachers will tire of trying to work with you. You may even find yourself with less classes.

This is not to say that giving in is the right answer in all cases. If something comes up that you disagree with, be calm. Ask your seasoned ALT friends around you if it’s a big deal. Experienced ALTs are your best source for finding out if something is normal or not.